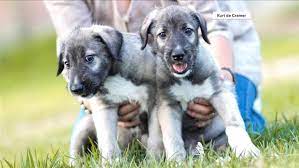 We all know puppies are adorable. It’s hard to resist those fluffy coats and unbelievably cute faces. But, have you ever looked at two puppies and thought to yourself, “Wow, they look exactly alike?” Your eyes may no longer be deceiving you. For the first time in history, two puppies were born identical twins.

The Irish Wolfhound twins were delivered via C-section with their five litter mates by Kurt de Cramer of Rant en Dal Animal Hospital in South Africa. The two puppies were attached by their umbilical cords to the same placenta – not a common occurrence during the procedure. The twins, named Cullen and Romulus, had some slight differences in their white markings but blood tests confirmed that they were, in fact, identical twins.

Why the slight difference in markings? Though the twins share the same set of genes, each gene will be influenced by indirect environmental cues, changing how each gene is expressed. So, like human identical twins, Cullen and Romulus won’t look exactly alike.

Although it is not impossible, identical twins are very rare for non-human species.

Many people have suspected that domestic dogs could be identical twins, but Cullen and Romulus were the first confirmed case. There could certainly be undocumented cases of non-human identical twins, especially since scientists have only genetically tested a small sample of wild and domestic animals. The rarity could also be because two organisms living in the same placenta don’t receive the same amount of nourishment. In the wild, that could mean only one animal survives.

Although Cullen and Romulus were born slightly smaller and lighter than their siblings, the now twelve-week-old pups are thriving and enjoying life with the rest of the pack.