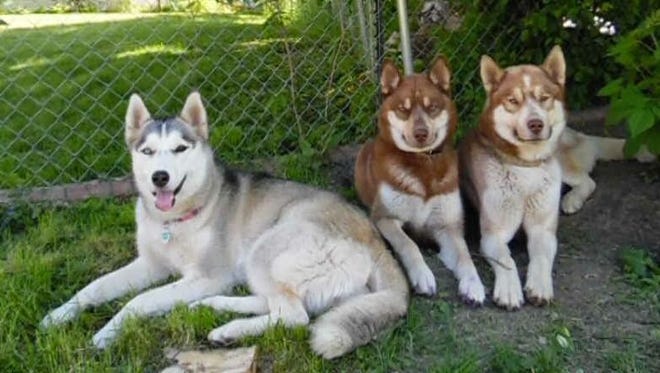 Siberian Huskies are known for their striking multicolored eyes, signature facial markings, and unique “voice”. Something else Huskies are famous for? Their escape abilities.

Often called the “Houdini” of dogs, Siberian Huskies can escape from nearly anywhere and everywhere. No matter how secure the fence, gate, or crate is, Huskies have an innate ability to open them.

Three Huskies from Iowa are no different.

Gracie, Kona, and Crimson live with Callie Gansen in Dubuque, Iowa. The siblings are three peas in a pod and just happen to be the world’s cutest escape artists.

One day, Gensen wanted to share their escape tactics with the world. She decided to film the three of them escaping, which she says they do daily.

The video begins with all three of them behind a seemingly secure gate. Gracie then takes a few steps back, jumps high in the air, and completely clears the fence.

“I usually have to put a fence on top of the fence that’s shown in the video to keep that one from jumping it,” Gensen said.

With Gracie free, it was Crimson and Kona’s turn. Rather than exert effort to jump the gate, Crimson decided to use a more tactful approach. He uses his nose and teeth to loosen the lock on the gate door. Mere seconds later, he manages to open it. Kona promptly follows.

Once Crimson reaches Gansen on the couch, he gives a signature Husky “growl” as if to say, “I told you I’d get out.”