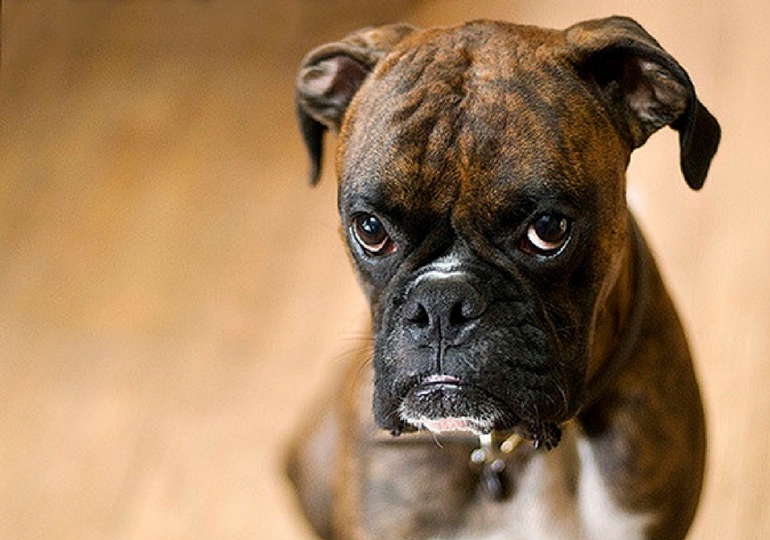 You know the look – the one your dog gives when you raise your voice or scold them. The sad eyes, the low head, and a general sense of guilt about them while they are surrounded by a mound of trash or ripped couch cushions. But do they actually feel guilty? Science is here to explain.

While dogs don’t necessary feel guilt like humans do, when a dog is scolded or reprimanded, they do become submissive.

The act of cowering originated as a survival tactic from their wolf ancestors. Animal behaviorists refer to this as an “apology bow”.

According to molecular biologist Nathan H. Lents, young wolves use apology bows when they begin social integration. Since wolves and dogs play similarly, young ones use playtime to learn the pack’s rules.

When a frisky wolf bites too hard, they will be snubbed by the rest of the pack for their bad behavior. And in order to return back to the pack, the young wolf must use the “apology bow”.

The same is true for dogs.

Lents, who works at the City University of New York, said, “Dogs have inherited this behavior and they will use it after any kind of infraction that results in being punished. As social animals, they crave harmonious integration in the group and neglect or isolation is painful for them.”

The physical signs of a dog being reprimanded include lowering their head to avoid eye contact and putting their tail between their legs – and they will stop panting. These are similar to how a young, low-ranked wolf submits to a dominant one.

And while it’s not necessarily an admission of guilt, their submissive behavior basically means they just want to be part of the pack again. Besides, who can resist those sad, guilty eyes?