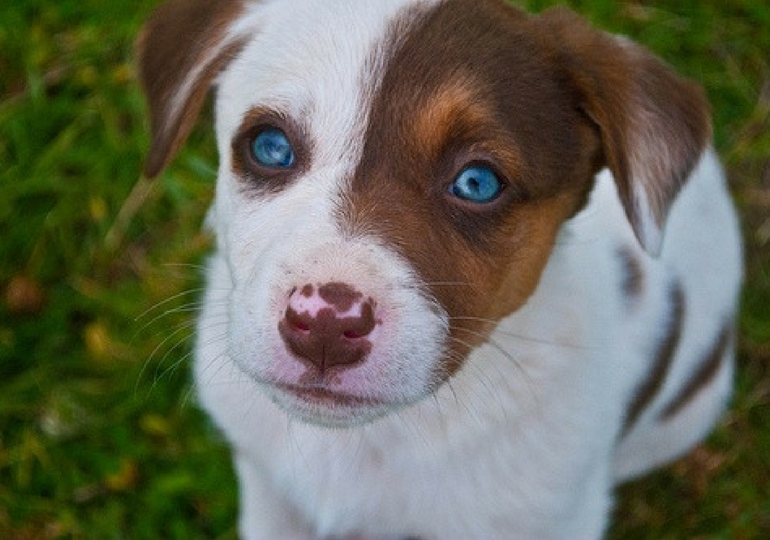 There is no doubt there is something striking about a dog with blue eyes. That’s not to say we don’t love our brown-eyed pups, but we can’t help but stare a little longer at the dogs with those baby blues. But what breeds have blue eyes? And why do some have them and others don’t? We’re here to explain.

To start, there are four ways a dog can have blue eyes. One is completely genetic while the other three are due to pigment loss in their coat.

The most common reason a dog is blue-eyed is due to a side effect of the merle gene. Merle dilutes random parts of a dogs pigment – including the nose and eyes – and causes the blue color in their iris. Because of this, “merle dogs” often have “butterfly” noses as well as completely blue, split, or wall eyes.

The more diluted the coat of a merle dog is, the more likely they’ll be blue-eyed or butterfly-nosed.

A dog with one dose of the merle gene will show effects such as scattered spots of missing pigment – which includes the iris. Dogs with two doses of the gene are often deaf.

White Around the Eyes

Another cause is when they have a significant amount of white around their eyes. White spots or areas on a dogs coat means the cells are not able to produce pigment. If these spread to the face, there could be pigment loss in the nose and in the eyes – causing the eyes to be blue and the nose to the pink.

The third cause of blue eyes is when a pup is affected by the “C series” – also known as “albino.” While there are no confirmed albino cases in dogs, “white Dobermans” have an extremely light coat, blue eyes, and a completely pink nose. They are thought to be a form of albinism. The last cause is due to inheritance of a completely separate gene – unaffected by the coat color. It’s a rare gene, however, and occasionally occurs in Border Collies but is mainly seen in Siberian Huskies. Siberian Huskies can either have one blue eye or two – no matter what their coat color is.

The Breeds that Have Them

There are certain breeds that have blue eyes regardless of their coat color. These breeds include the Siberian Husky, Australian Shepherd, Border Collie, Dalmatian, and Shetland Sheepdog.

Siberian Huskies can have blue, brown, or amber eyes or one blue and one brown eye, among others. Their blue eye color is not associated with deafness at all, unlike other breeds with blue eyes. Deaf Huskies are actually extremely rare.

Australian Shepherds typically have amber, brown, blue or azure eyes. Border Collies, contrary to popular belief, do not get their blue eyes from their ancestor – the Husky. In fact, a blue eye color always appears in a Border Collie and is thought to be desirable as it considered a “watch eye.”

Dalmatians with blue eyes are thought to be more at risk for deafness than those with brown eyes. Blue-eyed Shetland Sheepdogs are due to the dominant “merle coat color gene,” which has been linked to deafness.

Some dogs, like Weimaraners, may have blue eyes as a puppy but will change color as they age.

Though it is rare, some dogs can have blue eyes regardless of their breed or coat (since it is a recessive gene). Puppies, for example, can be born with blue eyes even if their parents don’t have them. So if you’ve ever wondered why certain breeds have blue eyes and others don’t, here’s your answer! But no matter what color our pups eyes are, we love them just the same.